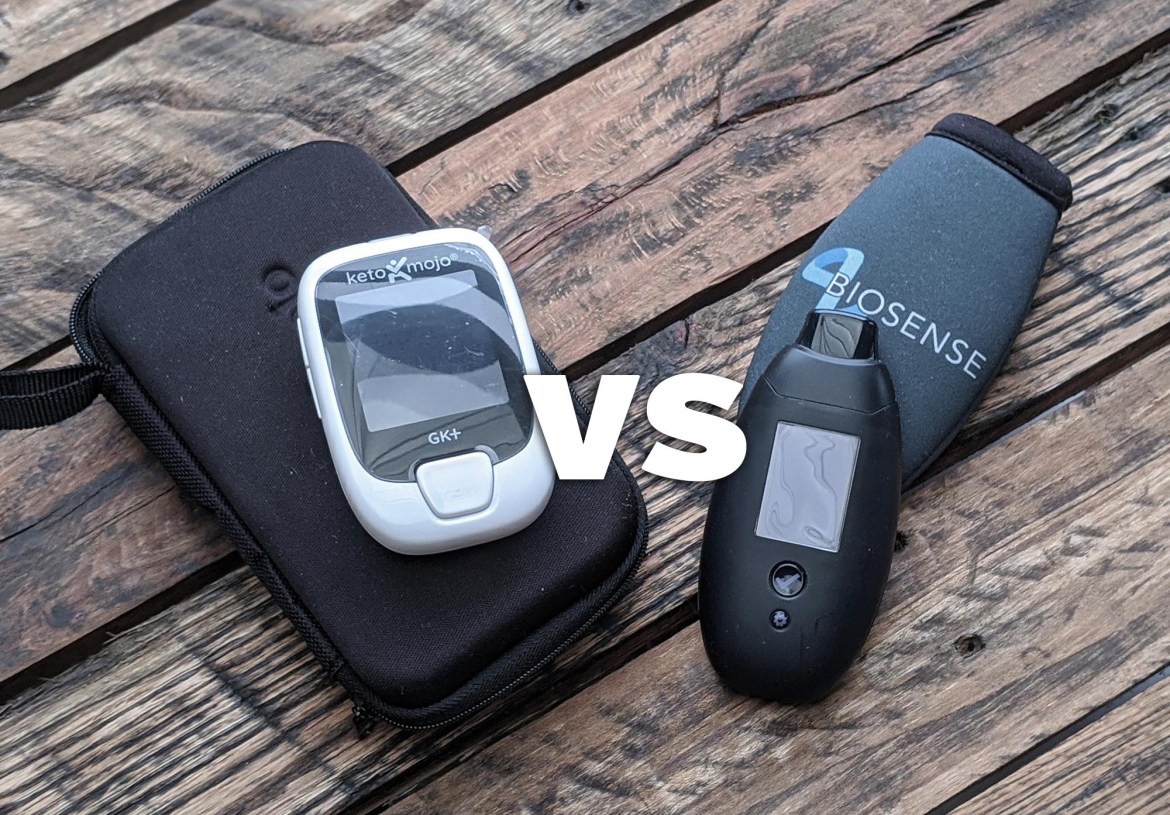 Keto Mojo v Biosense: Which is the Best Ketone Monitor?

I had a chance to do a head to head test of the Keto Mojo blood ketone meter and the Biosense breath ketone meter during my recent 8-day water fast.

I tested my blood and breath ketones using both multiple times throughout the day. My impression is below.

First, a quick reminder on why I planned to switch to Biosense:

Unfortunately, many of my expectations didn’t quite match reality after I was able to try the device.

Update!! This article is being updated January 2021 using the NEW keto mojo. Many of the shortcomings of the older version have been addressed.

Here’s how the Biosense compares to my new Keto Mojo on factors of:

Or skip straight to the bottom line.

The Biosense has the clear advantage here. For people like my sweet husband Brad who hate needles and blood, a breath meter really is the best solution, and Biosense is the only breath meter out there with clinically proven accuracy. In fact, I expect Brad to be the primary user of our Biosense.

However, if you’re tracking your GKI for therapeutic ketosis and not just your ketones, you’ll likely still need to prick for the glucose test. The alternative, which I’ve tried, is a continuous glucose monitor (CGM). A CGM only needs to be inserted every two weeks and will send 8 hours of recorded data to my phone via Bluetooth with just a tap.

Most of the time I’m not wearing a continuous glucose monitor, though – and most therapeutic ketoers aren’t either. Instead, I’m using the Keto Mojo as my blood meter and can use the same drop of blood for measuring my ketones, too.

Biosense is therefore generally best in the finger-pricking department for those who are only tracking ketones and not GKI.

Even though the up-front cost is substantially higher, there’s no incremental cost per test with the Biosense. The new Keto Mojo has less expensive strips – less than $0.95 for per ketone AND glucose strip. With Biosense, a separate glucose monitor and strips must be purchased in order to monitor GKI.

Ohmygod the Biosense takes so long to test. Over two minutes of noisy “preparing the device” before each test. Then usually 10 seconds to blow and sample, then 20 more seconds to analyze and display the results.

IF it doesn’t automatically start “deep clean” mode which takes well over 5 minutes. After my first day of testing I was in deep clean mode every time.

Note that, you only have a 2 minute 15 second window after “preparing the device” in which to test. If you get distracted and miss that window, you will need to wait over 2 minutes to prepare the device again. At my most focused, each test took 3 minutes.

Keto mojo takes 7 seconds to charge after insertion of a test strip. I usually prick during that time. Less than 5 seconds to register my blood drop and 10 seconds for results.

The Biosense has less to keep track of, which is nice. Just the device itself in its small carrying case if I’m going out for the day. To conduct a test on the Keto Mojo I need the device, strips, and the lancet for pricking, all of which fit in the slightly larger carrying case.

What I didn’t take into account with the Biosense was the fact that it needs to be charged so I need to keep track of it’s micro USB charger. It’s a little more brain space for my nomad life living out of a suitcase and adds the risk of running out of battery.

This could just be a problem with my limited mental bandwidth. The Keto Mojo requires keeping track of strips, the lancet, and backup lancet needles so pick your poison.

Really, it’s just the time investment and noise involved in Biosense testing that keeps me reaching for the Keto Mojo.

Biosense actually paid for a clinical trial demonstrating its accuracy and I give them points for that. However, a deeper look at that research doesn’t show that it is necessarily more accurate than Keto Mojo. The results of their small trial (19 people) showed that Biosense results correlated strongly with blood meter results. That is to say, they were similar. Interestingly, breath ketone numbers seemed to lag behind blood numbers.

However, I have a real concern with my experience using the Biosense.

The biosense’s readings varied A LOT over the 3-5 minutes it takes to take a repeat reading. From 32 to 40 within 5 minutes and 39 to 25 within 3 minutes… keep in mind that these were all taken after 2 days of water fasting when multiple readings on my keto mojo were showing the same steady, repeated numbers when these readings were taken.

The Biosense comes with a nice app that makes pretty charts, which I like a lot. The device does become untethered from the app seemingly every test but it’s easy to re-tether and I’ve never lost data.

The new keto mojo also comes with an app. Best of all, because the device tests both glucose and ketones, it will automatically calculate GKI, which is kind of huge.

Both devices integrate with Cronometer, the online tool most therapeutic ketoers use to track their eating and metrics.*

* Note that, device data must sync to the Biosense app before it is imported to Cronometer – usually a half day delay or so.

I wasn’t sure what to call this section but the fact is that the Biosense isn’t that useful to me because it doesn’t measure ketones over 40 ACEs, the rough equivalent of 4.0 mmol/L BHB ketones.

Those using keto for medical, therapeutic reasons — especially those targeting GKI less than 1.0 — are usually over 4.0 ketones and need to know how much over to know if their GKI is less than one. The Biosense 40 limit tells you you’re under 1.0 GKI only if your blood sugar is under 72 mg/dL.

Honestly, I’ve maxed out the 8.0 limit on the keto mojo once before but going over 8 mmol/L of blood ketones is incredibly rare and not advised.

You can see how, for me, the straight line chart showing that my ketones measured as ACEs are over 40 is less helpful than knowing when they’re higher or lower in this range.

Biosense is best for:

If this is you, click here for $20 off Biosense! (note that the discount only displays during checkout.)

Keto Mojo is best for:

If this is you, click here for 15% off Keto Mojo

Why I’m switching to the Biosense breath ketone...

Thanks for your blogs Maggie and glad you are doing well health-wise! Did you reach out to Biosense to see if you have a flawed device or is this standard isuses as far as you can tell? Regarding accuracy, app linking and time to startup and test?

I’ve heard they’re actively working on improvements and the device they sent me is a little older. I can’t vouch for the latest improvements, though, since I haven’t tried them. As far as accuracy, the Biosense does test for a different type of ketone. Blood tests test for BHB and breath meters for acetone so it’s possible I had higher BHB than acetone. I realized after I took some exogenous BHB ketones and it didn’t budge my Biosense readings.

To be honest, after about a month transition time I’ve gotten a lot more used to using the Biosense and tend to reach for it more often than my keto mojo these days. The noise doesn’t bother me as much and instead alerts me when it’s ready for testing so it doesn’t feel like it takes quite as long. I’ve heard from some other folks that the 2-5 minute prep time is pretty standard.

Thank you so much for the kind words, too!

I am disturbed that all the cost comparisons that I see for Biosense infer that the device runs forever. I believe I heard their Product VP say in an interview that the cartridge is good for about two years. $300 every 2 years is not a savings.

Oh Sharvo! This is such great information. Thank you! I’d never heard that the Biosense only has a 2 year lifespan. I’ll check with the company but, in the meantime, it still makes sense for me to update the article to take this into account. Since I test multiple times per day and the biosense breaks even after 250 tests, it’s still a significant savings for me (two years would be over $1500 in test strips for me). Nevertheless, it’s a critical point for folks deciding. Thank you again!

Keto-Mojo has an app too. It syncs via Bluetooth and pulls in readings. It figures you GKI for you. The data can be exported as well.

Yes! The new version has so many bells and whistles! I just got mine and can’t wait to try it and update this article!