Latest Posts
Three years with less than a year to live. Two...
September 2021 Updates: Two Years Cancer-Free, Actually
Post-treatment brain radiation necrosis or “My oncologist tried to kill...
May 2021 Updates: Not So Fast, Cancer
March 2021 Updates: Documentary and Return of the Cancer Edition 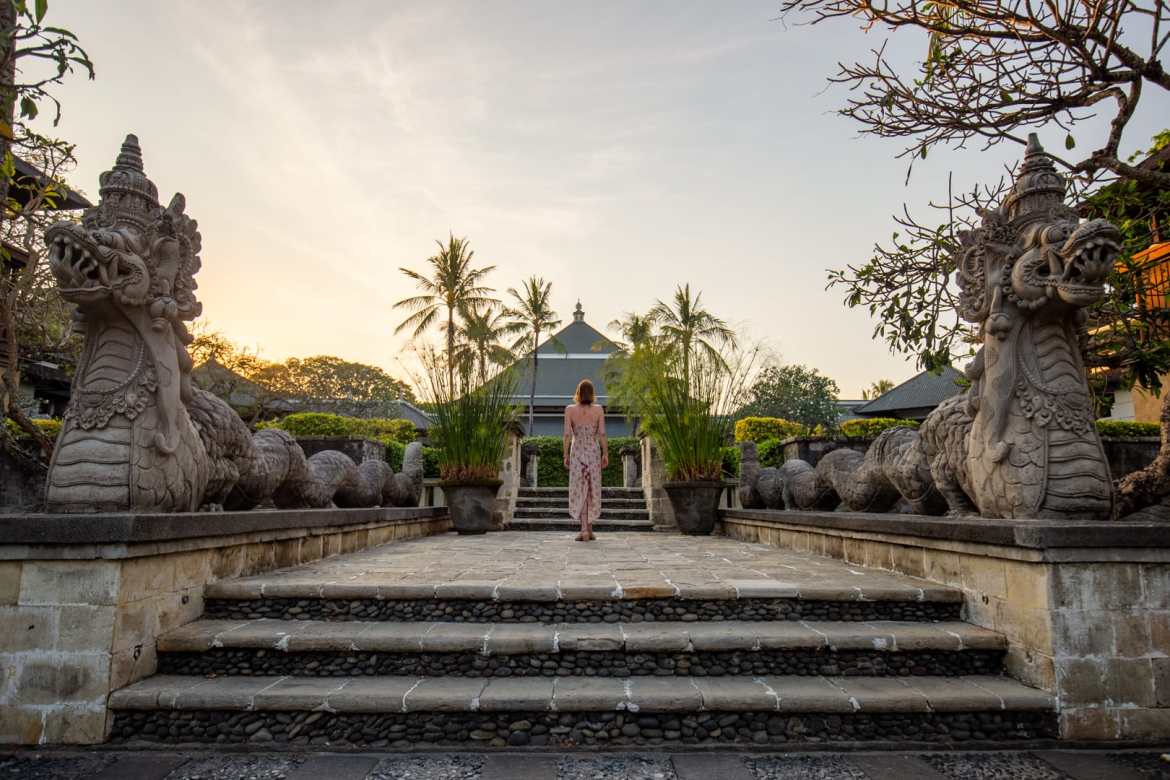 My story of healing from terminal stage 4 cancer

Brad and I moved from Los Angeles to Hong Kong one week before my 40th birthday.  We were ready for a new adventure and keen to experience more of the world.

Exactly one month later I was diagnosed with Stage IVB non-small-cell lung cancer that had metastasized to my brain and eye along with multiple lymph nodes throughout my chest and neck, quickly followed by more tumors in my brain, liver and abdomen.

The prognosis for lung cancer that’s spread to the brain is not good. Average life expectancy with treatment is 6-8 months and the 5-year survival rate is less than 1%. That is, it rounds to zero.

I grieved. For a couple of days, anyway. Then I started researching and decided that such a dire outcome didn’t really apply to me. People do survive this and, if anyone can do it, I can. One thousand is 0% of one million.

This blog started as a way to keep friends and family updated on my progress and quickly evolved into a repository of the many tools I used to dominate cancer.  Over the course of my journey I’ve encountered a lot of quackery and a lot of incredibly healing therapies.

October 2019, one year after I was diagnosed, four moths after I expected to die, I was in complete remission with No Active Disease.

While I credit the miracle of conventional treatment — targeted chemotherapy and stereotactic radiosurgery — with saving my life in those early days that were so touch and go, I’m convinced it was the lifestyle changes that healed me:

I believe that cancer is a messenger and, while I almost didn’t listen until it was too late, I’m now incredibly grateful for the lessons it taught me.

The “me” who was diagnosed with terminal cancer is gone but a much happier, healthier, more alive person remains in her place.

It took an absurd amount of reading and research to uncover the metabolic therapies that I credit with my healing. I’m incredibly privileged to have the background and education to dig through the research, contact the doctors and scientists who are changing the cancer treatment paradigm, and attend the conferences where cutting-edge results are shared.

Survival shouldn’t just be for the privileged.

I’m now dedicated to spreading knowledge of these treatments. Normally, a cute pharmaceutical rep would inform an oncologist of the latest breakthroughs, or you would ask about it after being prompted by a commercial with terrifying disclaimers. In the case of therapies like “fasting,” there’s a lot of research, but not a lot of marketing dollars. I have no doubt these therapies will become standard of care in time but we cannot wait to start saving lives.

I hope the information on this blog can guide those facing their own diagnosis. I myself returned to school to codify the knowledge I gained during my healing so that I can provide coaching to those who need personalized guidance.

October 2018
Diagnosed with stage 4 lung cancer with mets in right eye (1), multiple lymph nodes (8+), and brain (2). Read the story of my diagnosis here.

Weekend after diagnosis, begin first fast. Break fast eating only healing foods that would support my body while fighting the cancer.

November 2018
Radiosurgery to treat the two brain tumors on 7 Nov and started crizotinib (Xalkori) 8 Nov. Had an incredible response to Xalkori.

December 2019
Second opinion at SCCA backpedals to “No Active Disease” (NAD) in the body, new activity in the brain with “possible leptomeningeal involvement”.

March 2020
I see a neurosurgeon and get the needed MR spectroscopy and perfusion scans to prove it is radiation necrosis. Between last month’s MRIs and a fresh PET, I am finally, officially cancer free with no caveats. Except that dying brain tissue in my head.

April 2021
All four previously treated tumors in my brain have become necrotic resulting in some significant brain swelling and small mid-line shift. Evidence still indicates I’m cancer-free although there’s no way to be sure without a biopsy. My cancer tumor markers and body scans are perfectly normal.

Presently
All is steady. Minor seizures and aphasia from the radiation necrosis but confident I can heal from this as well. Sincere in my belief that cancer is the best thing that ever happened to me.

Detailed Updates as They Happened

Original diagnosis October 2018: Non-small cell lung cancer (NSCLC) adenocarcinoma that’s metastasized to multiple lymph nodes in the chest and neck, the brain, and the right retina.   Primary tumor was in the left lower lobe and about 5.5 cm in diameter.

Subsequently metastasized to liver and abdomen, two more locations in the brain (total of 4 brain tumors treated with two rounds of radiosurgery).

Three years with less than a year to...

Hi! I was curious when in your journey that you stopped all TKIs ?

Hi Ian,
I cut down to a half dose after being cancer free for 6 months. Note that I did this without my doctor’s permission or approval and I don’t recommend anyone else go against their doctor’s instructions. I don’t know if docs will ever advise that I stop taking them but I will consider it myself after a few more years cancer free — maybe sooner depending on my insurance and medical costs. Best!!

Hi Maggie,
Well done! I’m pleased to hear that your cancer is in remission.
I was wondering if you were able to notice/feel any lumps in your lymph nodes and were they removed?
David McDonald (Aust.)

Oh boy yes! The tumors behind my clavicles were the largest and their feeling size was kind of my bellweather. At one point you could see them poking out (picture here: https://cancerv.me/2019/02/27/a-few-steps-back/) I could also feel one in my back but only from the inside.
I never had surgery or anything removed. They all just dissolved on their own.

Hello Maggie,
We have just started on our journey with my husband’s recent Glioblastoma diagnosis. I have appreciated reading through your site and gathering helpful information. I was wondering if you had a printout of a week or two if the plan you follow to keep your GKI low, including fasting routine and meals. I am struggling to keep his GKI low enough (especially during radiation and chemo). Any specifics would be so helpful! Thank you!
Christine Miles

Hi Christine. I’m so so sorry for what you and your husband are going through. At the same time I’m so impressed with the work and research you’re doing. I’m confident he will recover. Neither of you will be the same person on the other side of this.
If you subscribe to my newsletter (popup or in the right rail – don’t worry, I send about 2 updates a year), you’ll receive a printable one-week meal plan based on my eating. Full disclosure, I actually water fast a least one day a week to keep my GKI <1.0. Right now I'm on day 4 of a water fast just to reset and really lower that GKI. I also do one-on-one consulting and custom meal plan preparation if that's more helpful to you. I feel like you two have already figured out what you need on your own. My only advice then would be to explore fasting which is especially beneficial during chemo and radiation. https://cancerv.me/2019/08/28/how-to-fast-and-why/
Much love to you both!

Hi Maggie,
Thanks for your response. The reason I asked the question is I have stage IV Metastatic Melanoma and I have just refused surgery to have the lingual nodes on my L/H leg removed by dissection. Their argument is, it would reduce the chances of the cancer spreading, however, there already are two hotspots on my spine. Unfortunately, the Oncologist would have used this histology to create a genetic treatment for the other two areas. Not sure what is happening now.
Currently doing the Wim Hoff method, in conjunction with a ketogenic/carnivore diet. I have managed to lose 15kg over the last 2 months, trying to get my glucose readings down (4.4 mmol/l).
Finally, reading papers from Prof. T Seyfried and Prof. D D’agnostino, and others on the Warburg effect (Dr. O Warburg 1926) to find an alternative treatment. Looking positive for now.
Regards David McDonald (Aust)

It’s amazing to come across your site filled with so much useful information. Did the liver mets go away on their own or did you get SBRT done for them as well? Also, do you have any tips for improving muscle while being on the keto diet?

Hi! My only convention treatment was a targeted TKI (crizontnib followed by lorlatinib) and two rounds of stereotractic brain radiation for four tumors in the brain. On the side I did the COC protocol, keto, fasting, supplements, and a massive stress-reduction campaign (yoga, meditation, breathing exercises, regular exercise, etc) Nothing fancy for the liver, the mets melted away along with my other tumors. Alas, old fashioned weight training is the only way I know to gain muscle mass – it will allow you to eat more protein, too. Good luck to you!!

So inspired by this. We are doing much of the sane. Interested in what you did to release stuck emotions and energy. Was this kinetic energy release? Would like to look into this.

Hi Theresa! You are amazing for seeking this out – it really works. I’m now well over a year cancer free and truly living my best life. I’m sad for what you’re going through now but excited for your future!
Stuck energy-wise, looking back, yoga has probably been the most effective release for me but, at times, I needed something extra to bust through massive blocks of resentment and other emotions and TRE was probably my super hero there. I write about it a bit here: https://cancerv.me/2019/11/03/tre-and-neurogenic-tremors-exercises-to-releasing-stress-and-emotion/ Rolfing was also surprisingly effective for me. These days, I’m a little more sensitive and can really benefit more from acupuncture and even (I know it sounds crazy) reiki, It’s mostly frustrating how many false leads I had to follow to find what worked for me. Some modalities really didn’t (tapping, EFT, reiki in the early days). Don’t be afraid to experiment and try it all until you hit what works for you!
Much love to you!