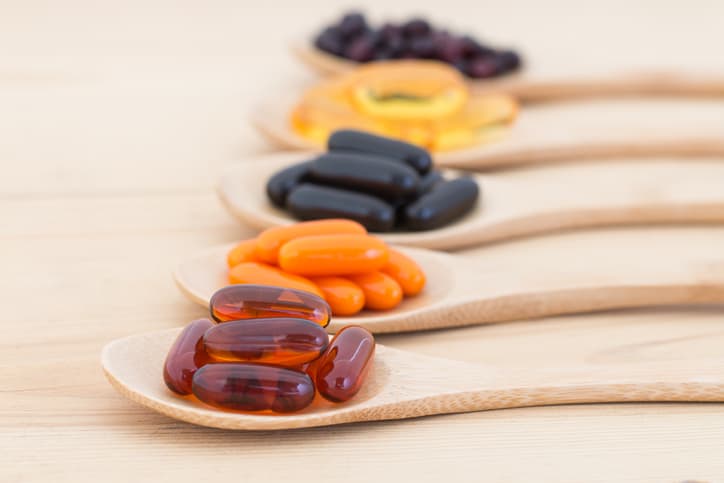 I strongly believe that it’s better to get all my nutrients from the raw, whole food that I eat but, let’s face it, it’s really hard to find fresh reiki mushrooms or organic ginseng leaves at a reasonable price these days.

As I pore through the research out there, below is a snapshot of the supplements I currently take each day, the ones I’m still reading up on, and the ones I’ve relegated to the bin for now. My Hong Kong oncologist is not a fan of supplementation but the teams at the Mayo Clinic and Care Oncology approved my list. I’ve read up on interactions and side effects and feel pretty confident with what I’m doing.

Let me know if there’s anything missing that I should look into!

These are supplements I’ve researched such that I’m confident there won’t be a negative impact on my health.

Yes, it’s lots of pills, but all I can tell you is I haven’t had a sniffle or a cold sore since I was diagnosed with cancer. That includes the time I took 14 flights through 7 states plus overseas during 4 weeks of winter. Just sayin’…

The medicines I take are known to damage the liver. Since my diagnosis doctors have discovered two lesions on my liver and a kidney cyst. These detox organs are working overtime and deserve all the support they can get.

Did you know that one of the most common chemotherapies for breast cancer, taxol (later renamed paclitaxel), comes from the bark of the Pacific Yew tree? Just because it grows in nature doesn’t mean it’s not powerful stuff.

I subscribe to the metabolic theory of cancer and, even if you don’t, you can’t deny that the mitochondria of most cancer cells, including mine, are broken. I’d like to keep the healthy ones healthy and maybe heal the broken ones.

Supplements I Do Not Take:

Tried and put aside – temporarily in some cases

I used to take these but have set them aside for one reason or another.

Based on my research, I believe these would be harmful to my health or not worth the cost and therefore I am not taking them.

In the Backlog to Research

People have made many suggestions on supplements I should take. I haven’t had a chance to fully research and make a decision on the following.

I’m sure this list will be refined and maybe someday I’ll flesh out the citations and it can serve as a guide for others.

Lessons From a Fun Night Out

What about soursop leaf or extract? That stuff works, but could (according to one study) lead to Parkinson’s. Although millions of Asians drink it with no such effect. The strong tea is what has the compound most active. Get that. Love ya! Great info!

Thanks so much! I’ll check it out!!

I give a thumbs-up to Milk Thistle. I’m pretty leery of supplements, but I’ve used it intermittently, and it’s one of the few where I notice a difference.

Honey thanks for this blog, it’s fascinating,
I’m from Spain.sorry for my english
Please, could you tell me how you inform yourself that a supplement uses one way or another in the liver, as is the case with echinacea. Where can I find this information? I take other supplements and want to know.
Have you assessed or do you know if testing the supplements with kinesiology or quantum medicine is effective (quantum for example) to know if it affects us or not?
blessed

Hi Gema! Unfortunately, I came across the liver pathway information in my deep research on my TKIs. You’ve given me a great idea to see what I can turn up for common supplements and publish a guide here. My only advice is to read up on the medication you take.

Unfortunately, the only kinesiology study that I know of found evidence that it isn’t demonstrably effective. I don’t know much about quantum medicine but am eager to learn! I still tested my supplements using kinesiology and let the results be one of many factors to inform whether or not I would take them.