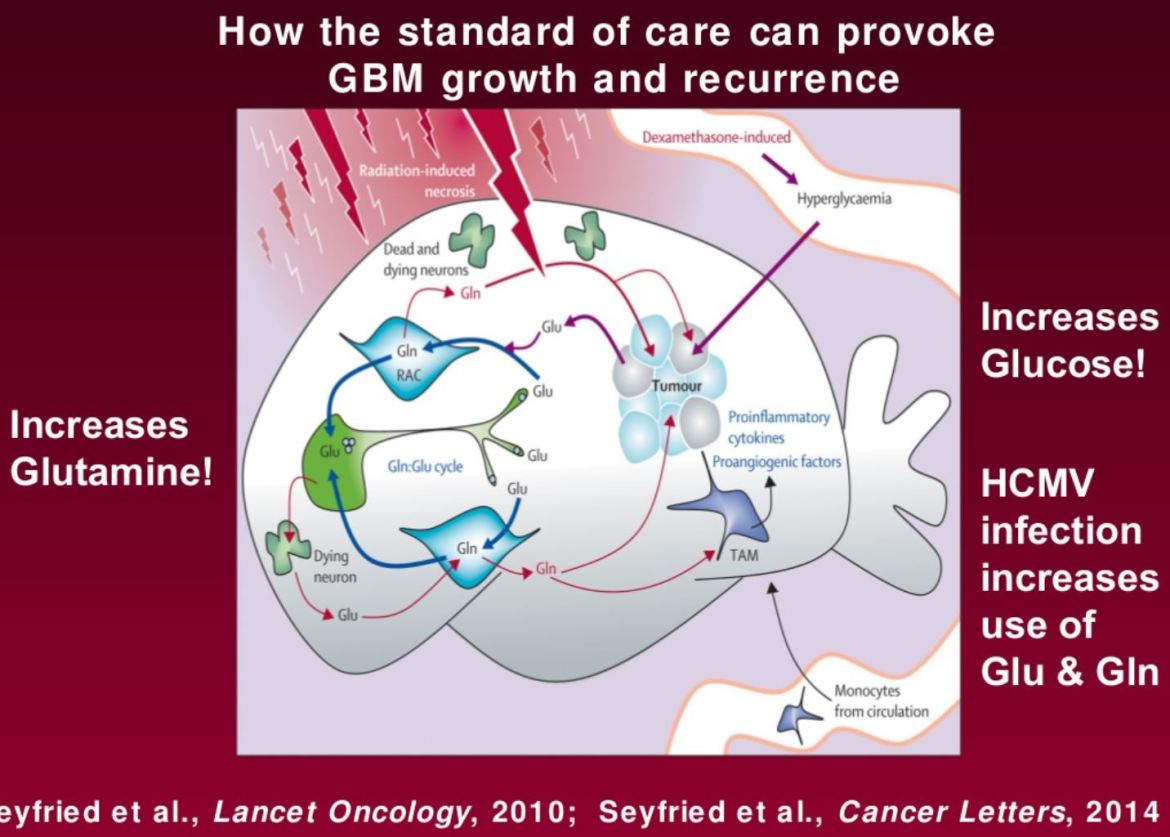 Medical mistakes account for over 250,000 deaths each year.[1] I was almost one of them.

Here’s how to make sure you’re not. If you’ve had or are considering any type of brain radiation, this is for you.

I credit Dr. Thomas Seyfried with saving (or at least dramatically prolonging) my life twice.

First, he’s the godfather of modern metabolic cancer therapy, which I believe has played a massive role in my cancer healing. Second, his research alerted me to the possibility and danger of brain radiation necrosis following stereotactic brain radiation.

At the time of this writing, it’s been two and a half years since I was diagnosed with terminal, stage 4 lung cancer metastasized to the brain, liver, eye, and dozens of lymph nodes in the chest and abdomen. It’s been a year and a half since I’ve been cancer free. And it’s been almost a year and a half that I’ve had to actively fight against medical advice that would kill me.

For anyone with a brain tumor who has had or plans to have whole brain radiation, gamma knife, cyber knife of any other kind of stereotactic radiosurgery (SRS), please read my experience.

While awareness is growing among oncologists, it’s still far too frequently misdiagnosed as cancer progression – with deadly consequences.

What is radiation necrosis, aka radionecrosis?

“Radiation necrosis is a rare but devastating side effect of high-dose radiation that results in permanent death of brain tissue.”[2] It’s essentially gangrene in the brain caused by radiation therapy. Brain cells die in a messy, disordered way, spewing their little cell guts out. Immune cells rush in to try to clean things up, often creating a traffic jam and swelling. Blood flow is reduced and healing can be challenging.

The symptoms are the same as a brain tumor. You can be asymptomatic at first – or always. I was asymptomatic the first year I lived with my first necrosis lesion. After the second developed, I started to have some periodic tingling and numbness. Four lesions in, mild seizures, aphasia and headaches. My doctors expected some balance and motor losses but I’m lucky not to have experienced that (thanks, yoga!). Personality change, cognitive dysfunction and mood disorders are all possibilities.

Reports indicate that radiation necrosis (also called radionecrosis, or RN) may occur in over 20% of instances of radiation treatment.[3] The reason doctors still don’t fully understand it is, quite simply, the treatments are new and not that many people survive long enough to develop it. With the advent of better treatments and prolonged survival, however, it’s becoming more widely recognized.

I’m so deeply heartbroken when I think of all the people who died because this deadly side effect of radiation was mistaken for new cancer and treated with more radiation.

A few things you need to know about radiation necrosis that my doctors did not:

The scariest thing about radiation necrosis is that it’s impossible to differentiate from cancer progression with your standard MRI. This is especially true for glioblastoma multiforme (GBM) but can be the case with any previously treated brain tumor. It certainly is for my lung cancer spread to the brain.

Eight out of the nine doctors I consulted insisted the lesions on my MRI were a new tumor and wanted to irradiate again. If I had done that, there’s no question in my mind I would be dead right now. Fortunately, after compiling the right scans using outside doctors and my own money, I was able to prove my case.

To the non-expert, RN will look like cancer in an MRI. While a biopsy is the only way to determine for certain, a good technician and doctor can make an informed opinion based on an MR Perfusion/ Spectroscopy scan combined with your radiation records. I also like to use my blood tumor markers as an indicator since they’ve accurately tracked my cancer progression so far. A brain PET may add another dimension. None of these are definitive but they can add up to an informed opinion.

Here is some good science your doctor can read.

Brain radiation necrosis can happen any time from 6 months to 6+ years after treatment.

Oncologists and radiation oncologists on three continents argued that it was too long after treatment for me to have radionecosis. My primary oncologist, who had overseen my two gamma knife treatments, believed it could only happen 6-12 months after treatment. This is bullshit. In fact, radiation necrosis typically occurs in the first year or two after treatment, [3] but can happen as late of 6-7 years later. That’s not well known because most of us don’t live that long.

Seyfried’s research indicates that the conditions created by therapeutic brain radiation are the perfect conditions to promote cancer.

How the standard of care for brain tumor can provoke growth and recurrence:

How to Treat Brain Radiation Necrosis

Science is only just starting to learn how to treat this. This 2014 article from Translational Cancer Research consolidates all the research I’ve read to date with an optimistic, can-do tone that I love.

A few options I’ve looked into:

How Not to Treat Brain Radiation Necrosis

It should go without saying that you should not treat radiation necrosis with more radiation. Make sure your doctors prove beyond a shadow of a doubt that your lesions are cancer progression before you zap your brain more.

Should I have SRS for my brain tumor?

New targeted chemotherapies and radiation therapies are prolonging lives and I don’t believe I’d be alive without them. Probably.

I had two rounds of SRS for my four tumors and, knowing what I know now, my decision would have been different.

I almost certainly would still have had the first – I was new to cancer and terrified of the idea. I just wanted the tumors out of my brain and radiation was the only way to treat recommended by my oncologist at the time. Of course, a radiation oncologist will always want to treat with radiation.

I strongly regret having the second round for my third and fourth tumors. At the time, I was about to make the switch to lorlatinib, a TKI which can cross the blood-brain barrier and may have treated those tumors. They were rapidly growing but still small and asymptomatic. Brad suggested I watch and wait but, again, I was afraid and felt a lot of urgency to treat. And I didn’t understand the potential consequences. If I were to make the decision again with 20/20 hindsight, I would have waited to see if my chemo had been able to stop progression before taking more drastic measures.

The lesson I’ve finally learned over the years is not to panic, not to overreact to every bit of good or bad news. It’s been working for me so far. My doctors tried to rush me into a third round of SRS back in December 2019 to re-irradiate a lesion that, as of May 2021, has never caused a problem. In that time I’ve lived in or visited Hong Kong, Thailand, London, Scotland, Munich, rural Austria, Vienna, Seattle and 28 other states in the US. If I’d rushed to treatment, there wouldn’t have been time for any of that.

As for you? I can only recommend that you listen to your doctor (getting a second, third, ninth opinion, as needed) and to your gut.

Dr. Thomas Seyfried Explains it All

Hi Maggie,
I am so overjoyed to read you got on top of this curve again and your tumor progression was misdiagnosed!!
Just wanted to send you more of those incredibly good vibes that keep you going and tell you we also got a good break after figuring out with 10s of additional analysis we did and paid for of course that my boyfriend’s tumor has been misdiagnosed as well – terribly off by which outcome by now he would have lost his hand and been on a horrid combination of meds.
Like you we’re going on and believe in our gut & additional research and docs as many and as much as we can find and are now prepping for far less invasive surgery – yay!!
Thank you for being my invisible supporter all along 😉
Will keep following your progress no matter what life throws next at us.
Big hug!

Very courageous , Generous and powerful of you to share your story that means a lot thank you

Oh wow! Thank you so much for the kind words!

Dear Maggie, I’m so happy to have found your website. It’s the first comprehensive and well-structured website I’ve stumbled upon when researching a keto-diet for my father who was diagnosed with a GBM4 last week.

Thank you for sharing your experience, it could be a life-saver!

Lots of love and light,
Eva

Thank you, Eva! As part of the upcoming documentary, Brad and I have been interviewing so many GBM thrivers. 5 years, 8 years, 10+ years. There is hope!