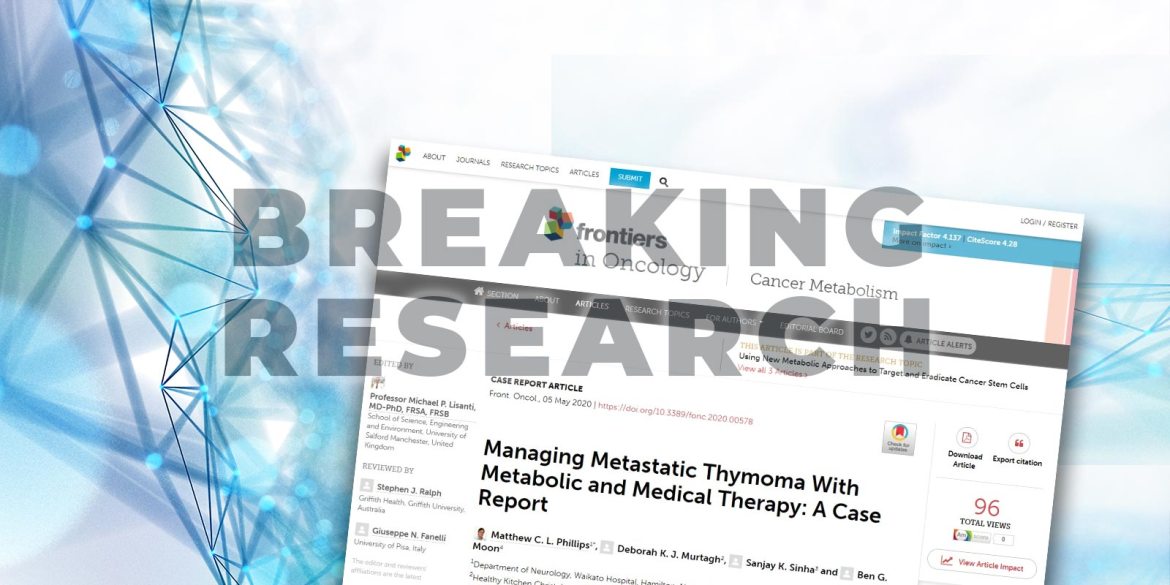 Brad and I were fortunate to meet Dr. Mathew Phillips, the first author for this case, at the 2020 Metabolic Health Conference. The paper was in peer-review at the time and we’ve been waiting anxiously for it to be published ever since.

Click here for the original study, Managing Metastatic Thymoma With Metabolic and Medical Therapy: A Case Report, published in Frontiers in Oncology. A summary is below.

Our hero, the patient, was diagnosed at 37 with inoperable type AB, stage IVA thymoma, a tumor of the thymus. This kind of cancer is usually associated with a neuro-muscular disease called myasthenia gravis (MG) which can affect the ability to move the eyes, swallow, walk and talk. She’s had MG for over a decade and treated it with various drugs but only discovered the thymus cancer after it had spread to multiple places in her lung and pleura.

The prognosis for inoperable stage 4 thymona is not good. The only conventional treatment available is chemotherapy to perhaps extend her life and ease symptoms. She was 37-weeks pregnant at the time.

She declined chemotherapy and instead chose metabolic intervention only. She delivered a healthy baby girl two weeks later.

Her MG was monitored by her neurologist and she took some different medications for that: pyridostigmine, prednisone, and intravenous immunoglobulin (IVIg).

It took some time for this article to be written, go through peer review and be published but I know from email with the author that “She remains healthy and no evidence of cancer at 3 years.“

“There were several fasting-related adverse effects including cold intolerance, fatigue, and generalized muscle aches, all of which peaked during the first 3 days of each fasting period and progressively resolved over the first year such that they no longer occurred by the second year. No adverse effects occurred in relation to the ketogenic diet.”

“For 2 years, our patient relied almost completely upon a metabolic strategy to manage her metastatic cancer, during which time she remained active, maintained her diagnosis body weight, and the tumor volume increased by a modest 13%”

Through fasting and ketogenic diet she limited the tumor from growing but it was only after the two MG attacks that she saw a major reduction in tumor size.

From the study: “Given that both relapses in our patient were characterized by abnormal immune function and marked weight loss, it is possible that immune activation and extreme energy restriction contributed to the regressions, and since both relapses were treated medically, one or more of the myasthenia medications may have contributed to the regressions.”

The “extreme energy restriction may have contributed to both regressions … During each relapse, our patient experienced a profound reduction in appetite resulting in minimal calorie intake over several weeks. The ensuing weight loss was considerable … In both cases, such a degree of weight loss would have created drastic alterations in ketone, glucose, glutamine, and growth factor levels, fostering a hostile physiological environment for metabolically inflexible cancer cells. Thus, it is possible that an extreme metabolic-induced regression occurred in our patient.

The researchers “hypothesize that 2 years of a combined fasting and ketogenic diet intervention metabolically weakened [the tumor], ‘setting the stage’ for immune activation and extreme energy restriction to destroy the majority of cancer cells during the [MG attacks]” with her MG meds potentially helping to destroy remaining cancer cells.

This is such a perfect example of Dr. Thomas Seyfried’s Press-Pulse therapy. The press of fasting and keto weaken the cancer with other metabolic interventions providing a “pulse.”

I hope it’s not long before these metabolic therapies like fasting and keto become standard of care.

I’m so grateful that there are doctors and scientists like Dr. Matthew Phillips and the other authors of this paper who take the time and effort to document the amazing results. There are so many anecdotal reports of metabolic interventions working but, until enough research is published to convince the conventional medical system as a whole, these reports will continue to only come from patients who defy the standard doctor’s orders.

Dr. Phillips has been amazing in answering my questions these past few months. He is a true compassionate healer and passionate scientist seeking the heart of truth.

Hi Maggie.I’ve just discovered your website today and really love the content -this person’s account is inspiring to say the least. I’m about to have my OMAD meal and I’ve been in ketosis since getting up this morning – currently about 1.5 GKI . I test with the KetoMOjo and did a bit of experimenting today – found out that the tiny splash of milk in my coffee really stuffs up my ketones! Black coffee it is! Take care.

Hi Cliff! I’m so happy to meet you! I’m so impressed by your dedication. Our experience sounds similar – there are totally random things that will throw me out of ketosis – like milk. Just hearing that you’re sensitive to this and making adjustments based on your personal experience is thrilling to me. Looking forward to hearing more!

Is it always necessary, in your opinion, Maggie, to fast when starting out? I didn’t and went right into therapeutic keto and quickly achieved great numbers. I am a fan of fasting, just want to know if it is a must-do. Thank you.

Hi Dave! I never would have believed it except that I’ve had several clients who, like you, quickly slip into *deep* ketosis and, in fact, need to be careful not to go too deep for doo long. I’m super jealous =D Obviously, it’s not necessary for you to fast to get the benefits of keto for cancer. Even so, in my conversations and email correspondence with Dr. Phillips, he’s pointed out that there are additional benefits from fasting such as autophagy.

While there’s sadly little research, I personally think there’s still value in a periodic 3-5 day fast – especially for those undergoing chemo or radiation (per Valter Longo’s researcher). Above all, listen to your own body, though!