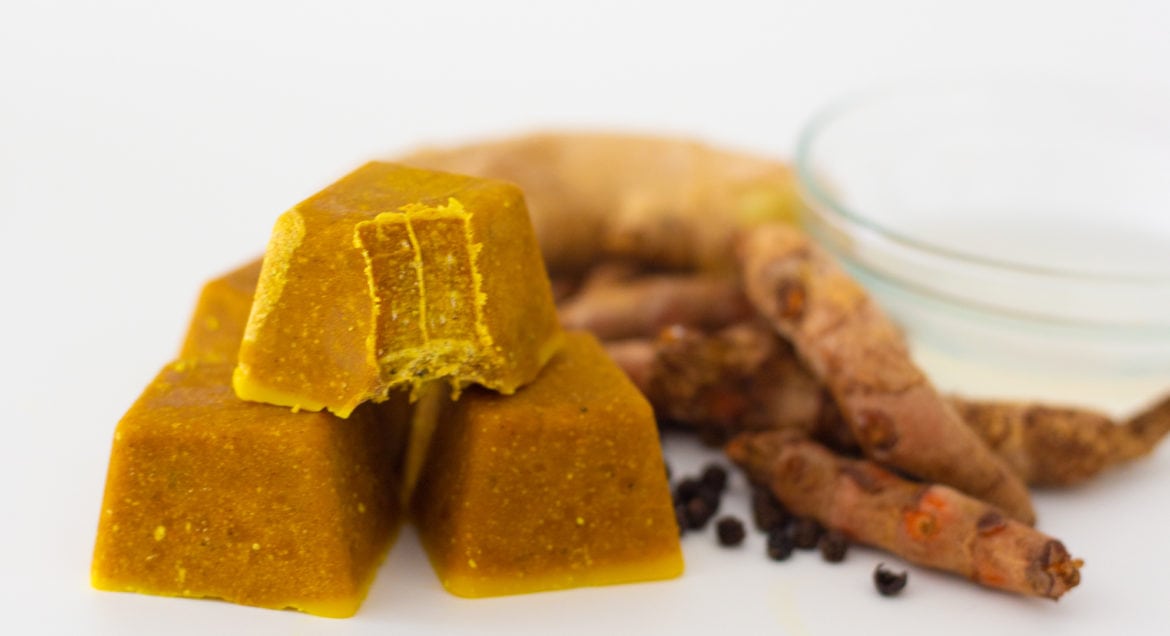 These little morsels have changed my life.

There are so many foods I want to eat in a day for their medicinal benefits but it’s really hard to find the time. Curcumin-rich turmeric, cancer-fighter of legend, is at the top of the list of foods I want more of. It’s also pretty high on the list of foods that take time to prepare since it needs to be eaten with black pepper and a fat for maximum bioavailability. I know I could take a supplement but I strongly believe in getting my nutrients from real food when possible. (Not gonna lie, I’m also a little concerned about how much processed vegetable cellulose I’m consuming in the form of my 40 or so capsules a day.)

I initially thought I could make nightly “Golden Milk,” the traditional turmeric drink that’s super hot on blogs right now, but even if I prepared the paste from which the milk is made each week in advance, the daily preparation is still more kitchen work than I’m down for after making dinner.

Earlier this week I was suddenly struck by a vision of condensing this golden milk into a small fat bomb I could just pop out of the freezer each night. Even better, it could serve as a tasty, portable vehicle for many other extracts and supplements.

This idea worked out even better than I expected. The strong flavor of these heavily spiced, coconut-based, super keto fat bombs perfectly mask some of the less delicious but healing things I want to get in my body.

These little bites have made my life so much easier while increasing the cancer-fighting nutrition in my diet. The recipe here is for a basic turmeric “golden milk” fat bomb with a full gram of turmeric and less than two net carbs that you can stuff with whatever you like. I added L-lysine, Om reishi powder, ashwagandha powder, sea buckthorn oil, and turkey tail extract to this batch.

While different people have different metabolic reactions to different types of food, below are the results of my sensitivity test: negligible impact on blood sugar and positive impact on blood ketones and thus GKI. Keep in mind this was with all my crazy supplements added in addition to the recipe below. There was at least another gram of carbs in the version I tested and I still got these great results. This is truly medical grade food!

Another keto for cancer trial with incredible survival results: 100% vs 60%

Make Your Own Easy Organic Chipotles in Adobo...

How much of the other supplements did you add to this batch?

Hi Amy! It’s been awhile since I made the batch photographed here but I know for sure that it had 20g L-lysine powder and a substantial amount of ashwaganda root powder. Also some medicinal mushroom (reishi, turkeytail, cordyceps) powder, I believe.

I hope that helps!

Hi Tanya!! Most food scales should have the ability to toggle between grams and ounces. This is the one I use – it’s travelled with me through three continents!

Of course, adjust to your preferences but be sure to weigh, measure and record in cronometer or another food tracker for the actually nutrition infomration.

I hope this helps!