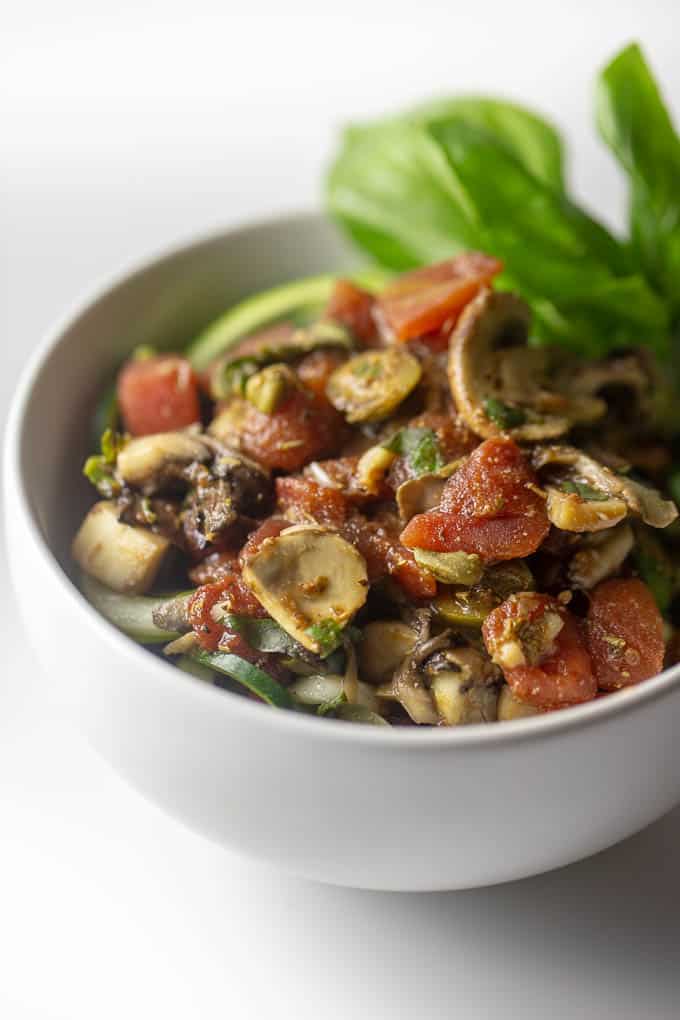 Lucky you! Another delicious ketogenic, vegan, anti-inflammatory, anti-cancer recipe!  I posted this earlier but an updating with new pictures that better capture the yumminess of this salad.

This recipe started as an attempt to incorporate more capers into my diet as they’re rich in quercetin, a powerful antioxidant known for inhibiting lung cancer.  It’s also a great way to sneak in extra raw garlic, dark leafy greens, and healthy fats. The carbs are a little high on this one but it fits fine in an otherwise low-carb day.  Or don’t eat half the recipe like I do.

While I’ve been eating mostly raw, tomatoes are one of the few foods whose cancer-fighting properties are enhanced by cooking.  While 15 minutes of cooking tomatoes will reduce vitamin C levels by 15%, overall antioxidant levels – including sweet sweet lycopene – are increased by 62%. [citation]   Similarly, many raw mushrooms contain potentially carcinogenic substances (hydrazine, agaratine, etc).  Cooking not only reduces the amounts of these substances but helps break down the mushroom cell walls to increase bioavailability of the good stuff more than enough to offset the reduction in the good stuff caused by heating.

On the taste side, the warm sauce here wilts the spinach nicely and captures all the best flavors of puttanesca sauce in an otherwise raw salad.

We recently bought a spiralizer and it turns out to be totally worth it – not nearly as much of a pain in the ass to clean or to store as I expected. Even the cheapo one we got works great.

Mix and match whatever you have available. Kale works in place of spinach. Artichokes would also be a great addition if you can find them organic. Bell peppers would also be delicious if you can afford the carbs.