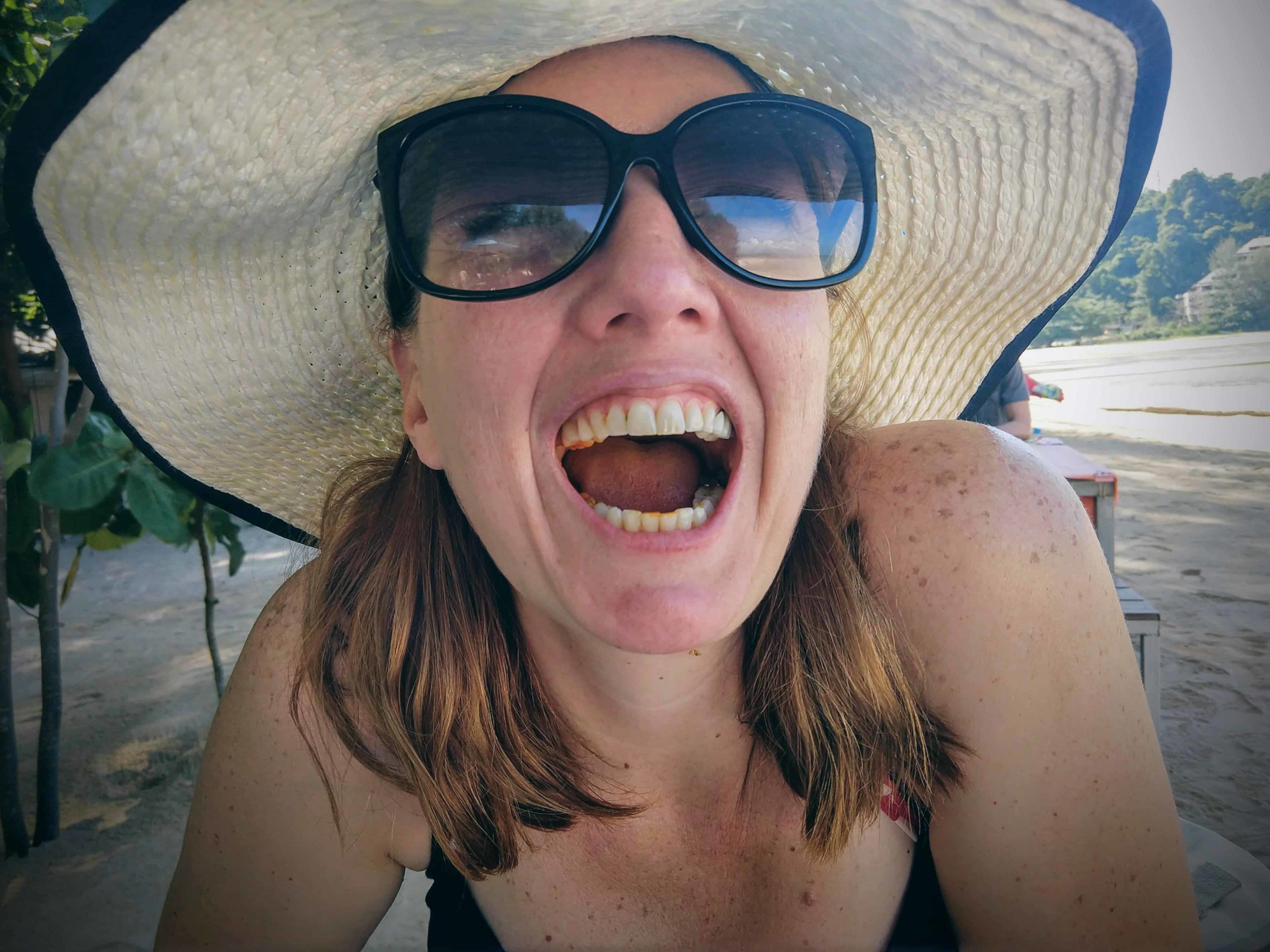 Note: This picture was taken in Thailand when Brad was trying to show me how gross my teeth looked after eating a nub of straight turmeric root.

I’ve always had pretty bad teeth. My mouth is riddled with fillings, crowns, and even a bridge. At the same time, for the past decade I’ve been super loyal to my wonderful, old school dentist in LA. He doesn’t do the fancy upsell stuff like whitening or deep cleaning and didn’t have the latest high-tech equipment like the prophy jet. He just cares really deeply about his clients and would come in on a Saturday or early morning whenever I asked.

Part of his old school character, however, included continued use of amalgam fillings.

Now that I’m dedicated to making my body happy and reducing any strain on my immune system, I decided to look into the wisdom of those fillings.

While on our whirlwind tour of the US I scheduled a consultation with a “biological dentist.” I read about this specialty in Bill Henderson’s Cancer Free: Your Guide to Non-Toxic Healing. It sounded a bit too hippie-New Age for me and the fact that Henderson believes that root canals cause cancer only added to the faint scent of quackery. Nevertheless, a little more research turned up that a biological dentist is a regular dentist who commits to “seek the safest, least toxic way to accomplish the mission of treatment, all the goals of modern dentistry, and do it while treading as lightly as possible on the patient’s biological terrain.” [1] Essentially, they consider a patient’s overall health while doing standard teeth things.

I chose a place in Austin because they accepted my insurance – which I’ve been lucky enough to keep through COBRA – and overall I was super impressed with my experience. The office was more advanced than any I’ve been in. How dental technology has advanced since the 60s when my LA dentist set up his practice!

The dentist spent a lot of time with me talking over my diagnosis and treatment, then pulled up the x-rays and walked me through his assessment.

I immediately thought they’d bought into the Bill Henderson nonsense but slowly came around.

As background, I’ve had four root canals (see: the first sentence of this post). Many years ago, one of them became infected and the tooth had to be pulled – hence my bridge. I’m not sure why this happens but I do know the roots of my teeth extend into my sinuses so maybe that contributes.

As seen in the x-rays, two of the remaining three are now infected. Rather than keep my immune system constantly occupied fighting off the infection, taking course after course of antibiotics to keep it in check, and waiting for the last tooth to get infected, he recommends just eliminating the problem. Apparently, biological dentists aren’t big fans of leaving necrotic tissue inside the human body to fester for years.

Embarrassingly, my biggest concern is vanity. Even though the extraction candidates are all back teeth, my bridge is connected to one of those teeth and that hole would be partly visible when I smile. Also, that would put me at a count of 10 teeth removed (2 for braces to correct my overbite, 4 wisdom teeth and 4 for infections) which kind of offends me aesthetically.

Secondly, I was of course concerned with the impact on my health. However, I talked to the oncologists at the Mayo about it and they had no concerns. If anything, they recommended doing it while I’m on Xalkori as it doesn’t cause any of the wound-healing issues that other treatments may cause.

Long story only slightly shorter: I decided to do it. Even though I’m not feeling any pain yet, I’d much rather deal with this sooner than later. It’s unlikely I’ll ever be stronger and healthier than I am now.

Just to be clear: I DO NOT BELIEVE THAT ROOT CANALS CAUSE CANCER because I believe in science and science, via the American Medical Association, has shown that “a patient’s risk of cancer doesn’t change after having a root canal treatment; in fact, patients with multiple endodontic treatments had a 45 percent reduced risk of cancer.” [2]

I do believe that anything I can do to reduce the load on my currently compromised immune system is good. Also, I remember the excruciating pain of my last infection and don’t want to go through that – especially under the current circumstances. Since the Mayo Clinic oncologists were on board, it doesn’t seem that controversial anymore.

Unfortunately (is it really?), the recommended oral surgeon couldn’t see me before we return to Hong Kong so I’ll get them pulled next visit to the states.

Back to the more conventional stuff.

I had the four fillings replaced on Wednesday and was again impressed by the steps the dentist took to keep toxins away from me. They used a dental dam to keep dust from the removal away from my gums and airways (who knew dental dams had a dental purpose?), provided an oxygen mask to make sure I wasn’t breathing any airborne mercury particles, and wore gas masks themselves. I felt good knowing all the products they used were as non-toxic as reasonably possible.

On the vanity front, the new, tooth-colored fillings look so much better than the old grey ones. Given that insurance helped cover the cost, I’m super happy with the results. Some folks recommend chelating treatment to remove any mercury that has leached into my body but for now I think my diet and my body’s own detox functions are enough.

I’ll post an update when I do the extractions later this year.

Travel and Diet: What I can eat v. what I should eat